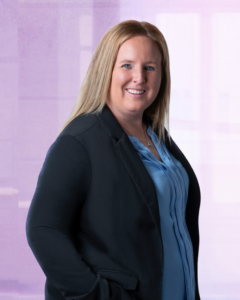 Sarah is a lifelong resident of Cincinnati and proud alum of William Mason High School. Her love for the city of Cincinnati has made her dedicated to helping and improving the community that gave her so much and has made her an insatiable Cincinnati sports fan. She left Cincinnati to attend The Ohio State University where she completed her Bachelor’s degree in 2008.  As an undergraduate, she became a member of Phi Alpha Delta and the Ohio State Club Crew team.

In 2011, Sarah graduated law school from the University of Dayton.  She participated in Phi Alpha Delta, the Volunteer Student Law Project and the Volunteer Income Tax Association during her time at UD.  She received a CALI award in Cyberspace Law and received an award of Pro Bono Commitment to the Community. After graduation, she started as an intern with the Montgomery County Public Defender’s Office in their juvenile division. She was hired as an employee, representing juveniles on a variety of delinquency issues before going into private practice in 2012.

Since 2012, Sarah has worked for various firms in the Dayton area before returning to Cincinnati.  Her practice areas include; divorce, custody, child support, abuse, dependency and neglect cases, adoptions, estate planning and probate, criminal defense and various civil litigation matters.  She has represented local fire departments and assisted them with their union negotiations and contract litigation.  Her practice has taken her to many juvenile, domestic relations and probate courts in counties all over the state including, Montgomery, Preble, Greene, Warren, Clinton and Hamilton counties.  She believes in helping clients through some of the most difficult times in their lives whether it be divorce or loss of a loved one, each requires great attention and dedication. She is committed to taking out the stress of the process to create a positive legal experience

In her spare time, Sarah enjoys exploring Cincinnati and giving back to the city. She volunteers her time at the Walnut Hills Soup Kitchen and the Change of Heart Organization. She enjoys traveling and running in local events around the city.  In the fall, you will find her attending multiple Ohio State Buckeyes and Bengals football games as well as spending time with her family and pets.

Sarah offers a thirty-minute consultation at no charge. 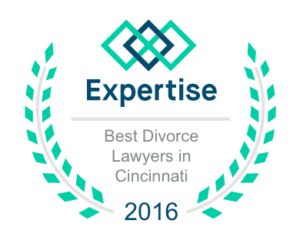 Sarah is my life saver. She was able to save not only my daughter but myself from an aweful relationship. She guided me through the whole process of divorce, protection orders, abuse counselors and custody. She was even able to recommend amazing counseling professionals for my daughter. She puts the well being of children first and foremost. I recommend her to everyone and anyone who needs help. She was highly recommended from a friend, and I am so glad I called her and she came into my life at a time that was pretty traumatic for my daughter and I.

Sarah was super helpful when it came time for my husband and I to create our wills. We enjoyed our experience working with her.

Sarah represented me in a case approximately 7 years ago. She is so friendly, re-assuring, confident, knowledgeable and PROFESSIONAL that she completely put my mind at ease. She is no-nonsense in her approach in both the face to face meetings and in the courtroom. I have, with 100% confidence in Sarah’s ability to represent ANYONE I know in ANY type of case, referred several friends and family members to her. ***If it has ever been a type of case that she doesn’t do or a county that she does not practice in, she offers an alternate attorney or solution. I very much appreciate that about her. Sarah is honest, accessible, and completely reliable, I would NEVER HESITATE to contact her with ANY MATTER that I could need representation for and have never hesitated to refer her to everyone I know who needs representation.