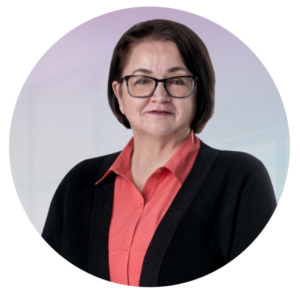 Mary is a lifelong Ohioan and proud Cincinnatian. She was born in Columbus, Ohio to Scottish immigrant parents and moved with her parents to Cincinnati at the age of 13. She graduated from Walnut Hills High School where she was an avid trombone player in the marching, concert, and jazz bands. After attending Indiana University in Bloomington, Mary returned to live and work in Cincinnati. She attended the University of Cincinnati Master’s program in Criminal Justice, which lead to a job as a Federal Investigator for the U.S. Department of Labor, investigating election fraud, embezzlement, and financial reporting in labor unions.

After several decades of work, at Procter & Gamble and the Fernald Environment Management Project, Mary returned to the University of Cincinnati to attend the College of Law where she received her J.D. in 2005. While at the U.C. College of Law, Mary was named Honorary Co-Founder of the Lois & Richard Rosenthal Institute for Justice/Ohio Innocence Project and was awarded that Outstanding Fellow Award in 2003. In 2005, Mary was present when Christopher Bennett, a wrongfully-convicted inmate at the Mansfield Prison, walked out of the prison doors a free man. It was the culmination of years of OIP investigation, interviewing, legal arguments, and appeals, and remains one of the highlights of Mary’s life.

Mary left Legal Aid to form her own private practice where she worked with local domestic violence agencies, the Ohio Domestic Violence Network, and as a Guardian ad Litem for abused/neglected/dependent children. Mary also became a Parenting Coordinator and helped families through divorce, custody matters, and with mental health issues. Mary was in private practice as a solo practitioner for 10 years before taking a position with the Hamilton County Job & Family Services where she prosecuted child support cases for the county for nearly 3 years.

When Mary isn’t working you’ll probably find her in a garden, tending her flowers, building raised beds, feeding the birds, bees, and chipmunks, or cutting down tree limbs. She is the former President of the College Hill Gardeners and is an avid traveler, photographer, artist, and animal rescuer. Her family is scattered across the globe, in Scotland, Canada, South Africa, France, and parts of the U.S., and Mary has a lovely little plot of land she has future plans for on an island in Canada.